Regarding American decadence. A revealing president in a new geopolitical context

American protectionism under president Donald Trump’s administration is just an exaggerated expression of a process of global power loss and its replacement by a new constellation of blocks organized around specific interests and the power of the strongest within each.

President Trump’s speech at the 74th General Assembly of United Nations was revealing in more than one sense. Let us set aside the fact that his presentation seemed coherent just because it was preceded by the speech of the bizarre Brazilian president, Jair Bolsonaro, that some of the European attendees described as emetic[1]. Among other wonders, Bolsonaro argued that it is a “fallacy” to say that the Amazonia is the world’s lung and humanity’s patrimony and that those who maintain that are threatening his country’s sovereignty.

On his part, Trump proclaimed his world vision not as a cooperative and coincident group of nations in pursuit of the planet’s wellbeing—especially regarding climate change—but rather as a series of sovereign countries after their respective national interest above any overarching structure. “As president, I will always put the United States first, just like you, as leaders of your countries, should always put your own countries first.” And he went on with similar goals, praising nationalisms.

Naturally, the American president was not aware of the basic logical contradiction in his argument. A “nationalist international” is simply an oxymoron. Far from preserving peace, such world would be inclined to multiple wars: it is Hobbesian world led by many bad apprentices of Machiavelli. As is quite common among American politicians, Trump ended his harangue with an invocation to God’s blessing. Since in the order of speeches he was preceded by Bolsonaro, Trump could well have summarized his position with an invocation to Brazilian author Mario de Andrade from his novel Macumaima: “Every one for oneself and God against all.” Without having to name God, in Trump’s world nature itself will be sure to punish us all.

However, the American president’s ineptitude and arrogance have one virtue: transparency. I will explain myself. American foreign policy, particularly though not exclusively with regard to Latin America, has always been brutal, contradictory, and, in some cases, treacherous of previous promises and declarations. However, until recently it was wrapped in a discourse of values such as liberal democracy, free trade, as well as the defense of freedom and human rights against dictatorships, traditional authoritarian regimes, and totalitarian systems.

With Trump, all that clothing has fallen down.  Today, the White House displays an open sympathy with despots of any stripe, be it a Philippine, a Turk, a North Korean, a Chinese or a tropical one from Mato Grosso. We no longer have to wait for a child in all his innocence shouting that the emperor has no clothes. Today, it is the emperor himself who vaunts with full impudence his own nudity.  When Trump denounces the biased character of the liberal press and the mass media that is not his own, when he attacks his nation’s own intelligence services, the FBI, or independent judges and, in general, every institution that more or less safeguards the American constitutional system from  an abuse of power, he unveils previously concealed maneuvers that were expected to remain covert. The reason is ever more evident: the president does not come from the political class (versed on putting on legal facades) but rather from the more direct and shady real-estate business in New York and New Jersey. He always operated in such ambience with arrogance, subterfuge, frauds and abrupt turns[2].

Faced with such behavior, the American establishment, even that sector that supported him in order to increase its profits, is angry and starts to prefer a return to the status quo ante. They are bothered by a president operating in the modus operandi of some politicians from the developing world: “For our friends, everything; for our enemies, the law.” As I stated in my book Strategic Impasse, Trump is not just a developer but also a demolition expert: he has attacked the structure of norms and alliances that for seventy years characterized the international system designed by the US –the main winner of WWII, and  such a huge and wealthy country that Octavio Paz called it a “philanthropic ogre.” Which world will we have now after such Trumpian coup de grace? To answer this question, I propose to make some specifically geopolitical observations.

First observation: In geopolitics, we can measure a country’s power not just by its ability to attain ambitious objectives, but also especially by its ability to survive strategic mistakes. Napoleonic France, for example, obtained many triumphs in the battlefield and in its power to impose its ideology and laws over subdued countries. Napoleon made several mistakes, but he could overcome them without major complications until he made the fatal decision to invade Russia, thinking that in a quick and decisive campaign he would force the tsar to capitulate and make concessions. However, he did not count on two crucial factors: Russia’s ability to withdraw inside its huge territory and even to abandon Moscow without capitulating, thus leaving French troops very far away from their logistic base and facing a harsh winter. Napoleon’s retreat was disastrous and was the beginning of the end of his empire. He invaded Russia with 600,000 troops and left it with only 90,000.  Napoleon was beaten not by the Russian armies but by the strategic depth of such large nation.

In the case of American postwar dominance and during the cold war, it developed alliances with other countries and granted them a strategic assistance.  This enabled the US,  in case of making strategic mistakes, to know that the resulting vacuum would not be occupied by other powers, even by its great Soviet rival that had reached the limits of its own expansion.  American interventions in Central America were a strategic mistake; Cuba’s blockade was another one; the Vietnam War was a huge miscalculation and, so on, without any of those mistakes affecting American financial and military power. That is no longer the case in the XXI century.

The fast development of China and of other regional powers has made American strategic mistakes seem overly onerous, not only in terms of life and treasure lost but also in its ability to maintain alliances and contain the expansion of other powers at its expense. The most notorious case was the second Gulf war and the invasion of Iraq, which resulted in a net increase in the power of Iran. Today’s margin of error is very slim and leads to the withdrawal of American occupation from strategic control zones, such as the Middle East and the Far East as well.

The United States is on the way of becoming more a regional power than a global power. This will take time but it will happen. From a military point of view, the huge superiority in firepower is not able to win any war or end interventions that become endless, comparable to the quagmire of French troops in the Russian steppe. The isolationist stance of Trump is revealing of the new situation. He acknowledges the strategic mistake of previous positions, but he makes it worse due to the incompetence with which he is managing the retreat.

My second observation: Trump the “finisher” has depleted the so-called American “soft power,” that is, the appeal of democratic values and the respect for human rights. The new “realist” stance places USA at the same level of cynicism and arrogance as countries they once criticized.  The lukewarm criticisms that Americans still utter regarding authoritarian and “illiberal” practices in other countries provoke the classic response tu quoque (“and you, too”).

From these two observations emerges a corollary. The American withdrawal—that in economics is expressed in terms of protectionism and neo-mercantilism—does not mean the end of transnational blocks but rather their transformation in terms of more diversity and a change in character. From now on, we will have more circumstantial and opportunistic blocks: variable groups of countries dominated by the strongest one in each region. Those left outside the blocks will be areas of dispute and proxy wars. This is a different model from the traditional imperialism we were accustomed to, which sported multilateral institutions and common norms (though always more in favor of some than others, as is the case with the European Union and Germany, or the model designed by the US at Bretton Woods).

The new model is transactional (multiple coexistence arrangements) and tributary (each country on its own as long as it pays homage to the strongest). This system is no longer one designed in London or Washington, but rather a new one drawn in Beijing. This new geopolitical configuration, sooner or later, will have a territorial expression with a redrawing of frontiers. Within and between the blocks and regions, large non-state monopolies will go on acting, especially in the areas of production chains, information technology, communication and social control webs. This new world that seems to emerge in front of our eyes does not bode well for the indispensable administration of the planet in the face of collective and existential challenges.

[1] . If a doctor tells his patient that he will prescribe him an emetic remedy, it is very likely that the person will not know exactly what it means, as this is a  technical terminology. The truth is that he is referring to a vomiting agent, a substance to induce vomiting. 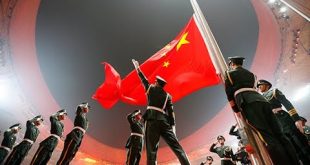