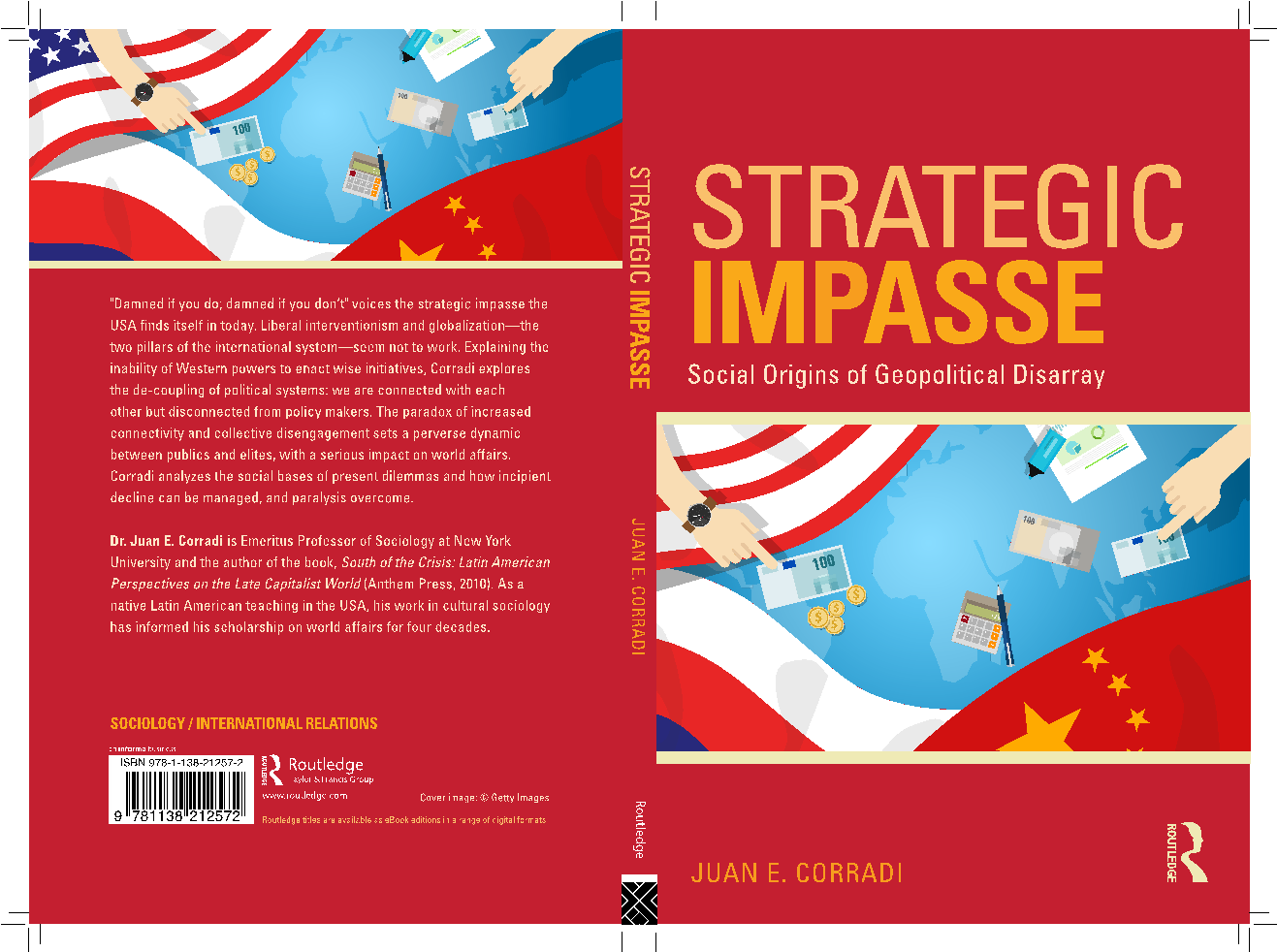 This note is an announcement.  In the current month of July a book of mine will become available.  Its title is Strategic Impasse and it offers my own views of the present state of geopolitics, some of which I have presented in Opinion Sur.  Here is a brief description and ten theses, which I hope will prompt critical thought.

Damned if you do, and damned if you don’t.  In international affairs the dilemma may be called strategic impasse.  Why do Western powers, and the United States in particular find themselves in this predicament?  What prevents the strongest power from carrying out its own will despite other actors’ opposition?

The book examines geopolitics using the lenses of social theory and social research. The first part analyzes the inability of Western powers to enact international initiatives of their choice.  What and who prevents them?  Europe and the United States seem unable to manage and mitigate unavoidable challenges and to prevent avoidable ones.  Starting with the West and using historical and comparative reflections on previous episodes of “losing the center,” it explores the de-coupling of political systems from the concerns of the citizenry, and the disarray of elites.  It explains the distraction of leaders from geopolitical challenges in Europe and the US and a parallel development at the level of civil society:  a mixture of routine distraction and fitful protests.  Connected with each other but disconnected from policy makers: the paradox of increased connectivity and collective disengagement sets in a perverse dynamic between publics and elites, with a serious impact on international affairs.

The second part of the book is devoted to alternate views of power and destiny manifest in the growing geopolitical weight of China, and to possible scenarios of collaboration or clash between East and West.  A centerpiece is an analysis of the changing nature of armed conflict as a window from which to observe the strategic impasse of the West.   The question addressed is: how can incipient decline be managed and paralysis overcome?  The book ends with a view of the impasse from the global South.

The following theses are developed and explained in the book.

We are witnessing the rapid undoing of the post-WWII international order, without a replacement yet on sight. The scale of planetary problems demands global and concerted solutions.  These solutions are presently visible and persuasive but they are non-enforceable.

Prediction does not work because it cannot anticipate events.  Only the formulation of plausible scenarios will help actors adapt to and manage unanticipated events.

The death knell of late capitalism is the loss of a non-capitalist context.  Left to its own triumphant devices it is likely to self-destruct.

Just as complete capitalism tends to self-destruct, so do systems that seek to replace it root and branch.  Assembling a new mixed system, with a specified hierarchy of components and the appropriate sequence of policies will be the task of the future.

When a social hierarchy loses credibility and a convincing rationale, it is likely to be overthrown.

With the advance of technology the manipulation of minds is both extreme and inter-personal (participatory).  Total alienation turns into a new form of false subjectivity.

The West ruled for three centuries but its unity is breaking up and its purpose is breaking down.  This decline has been silent for a number of decades, but it has become strident now. Attempts to retrieve the past are but the wail of groups upon whom history is about to roll.

Like switch points in a railway network, certain decisions have long-term consequences, and these become clear often only in retrospect. However, on the basis of past experience it is possible to gauge the implications of actions that are guided more by emotions than by sound discernment.  The current wave of national populism will destroy rational strategic choice.  This leads to the democratic self-destruction of democracies.

Correct strategy consists of two opposite and symmetrical rules of avoidance.  One is avoidance of rash military action.  The other is avoidance of protraction in conflict.  These rules are as old as geopolitics and the art of war itself.  They can be ignored at great peril for states and blocs of states.

Barring catastrophic war, Eastern powers will emerge from the present geopolitical disarray as the guarantors of a different international order.  In the new concert of nations and regions, the West will be allowed to play an important but secondary role.

If you like this text, by filling up the form that appears in this page you can subscribe to receive once a month a brief summary of Opinion Sur English edition.

Two Pyramids Facing Each Other