Globe against Earth: Perverse Effects and a Need for Utopias

Globalization has two perverse effects.  First, its unfettered growth threatens the very viability of life on the planet.  Second, it disarticulates societies and disorients people.  The result so far is symptomatic and often pathological behavior.  The need is urgent to formulate what at first sight seems a contradictory proposal: a utopia for realists. 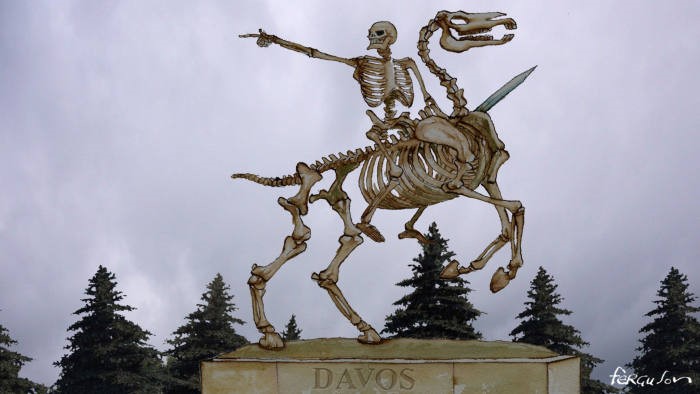 At the annual meeting of world elites in snow-clad Davos, the Chinese vice-president Wang Qishan defended globalization against the recent wave of nationalist backlash –that wishful fantasy of a return to the local, within walls.

“What we need to do is make the pie bigger while looking for ways to share it in a more equitable way,’’ Wang said in front of the glitterati. “Shifting blame for one’s own problems onto others will not resolve the problems.’’

These words sound reasonable. They rest on a premise shared by many economists and many world leaders, namely that growth (by standard measures) shall and should continue on a constant and infinite trajectory of “progress,” hence the figure of the ever-bigger pie.[1]

The premise, however, is suicidal.  “Making the pie bigger” –better shared or not– will soon require several planets, and we have only one. Such is the Big Unsaid of this and other summits, although I am sure it is a worrying thought for more than one among these masters of the universe.

In fact, many billionaires are preparing bunkers and escape plans to safe locations at home and abroad in case the claims for “a more equitable way” get out of control among the hoi polloi. But, will the privileged survive the fury that may be unleashed by the inequity of the present model of globalization in a degraded planet? In 2017, Evan Osnos of The New Yorker reported that “in recent years survivalism has expanded to more affluent quarters, taking root in Silicon Valley and New York City, among technology executives, hedge-fund managers, and others in their economic cohort.”[2] Like ancient pharaohs, the elite survivalists may just entomb themselves in luxurious silos while the world burns.

For, to quote the poet Dylan Thomas, those left behind (today they are Trump supporters in the U.S., but also the gilets jaunes in France, and tomorrow they may be a version of the sans culottes of the French Revolution):

Do not go gentle into that good night,
Old age should burn and rave at close of day;
Rage, rage against the dying of the light.

According to Bruno Latour, in a disturbing book that I have just finished reading, if all the signatories of the Paris Climate Accord of 2015 went ahead with their respective modernization plans, “there would be no planet compatible with their hopes for development.” [3]

When growth (as defined and propelled by late capitalism) outpaces its host, the host dies. Either growth stops or the host expires.  Is this not also a definition of cancer — an evil condition or thing that spreads destructively?

We will soon arrive at a point when there will be no more place to house the Globe of globalization. The Globe that we accept as a goal, and that is worshiped by ideologies like neo-liberalism, may well be the enemy of the Earth, where we live.

The choice is stark:  life or growth.  Death (or something worse, crowded, regimented, and despondent life[4]) will come not from scarcity as in the past but from perverse exuberance and lopsided distribution.  The time has come to redirect human efforts away from current globalization and towards the pacification of the struggle for existence, the real telos of history, and a goal that has eluded most generations before.[5]

If it were not for the exigencies of late capitalism (which artificially perpetuates the struggle for existence), the issues that today appear as the biggest problems –for example, the impact of automation—would be instead the gateway to a better life, in which prosperity (meaning fulfillment) would replace wealth, and creativity would replace labor and growth.

Today’s living generations have the means and the opportunity to move towards that other different goal but, do we have the necessary motivation?  Are we prepared to face a situation in which work –which defines homo faber but which capitalism has long reduced to labor—  is no longer the source of income and identity as we know them?  Can damaged life[6] –our own included– regenerate itself and beget a more decent society?  The stubborn commitment to the status quo runs deep in all the strata of society, also among those who complain they are left behind by globalization.  These are the questions that I pose in order to provoke the reader, and myself.  What if the good society that everybody needs, is the society that nobody wants? What is the role of utopia today?

Almost seven decades ago, the great American sociologist Robert K. Merton produced an analytic framework in order to understand the way people adapt to both ideologies and structural constraints in their behavior.  He devised two simple matrices (fourfold tables) superimposed on each other, based on socially defined ends and means, in terms of cultural norms (Matrix 1) and structural forces (Matrix 2).  He applied this scheme to the “American Dream”, that is, the overemphasis on economic “success” in American culture.  [7]

Merton’s study revealed (a) that the ideology placed more emphasis on the ends than on the means of (monetary and status) success, and (b) that the social structure placed more obstacles towards success for some groups than for others.  Thus, groups that both internalized the goals of the culture and had privileged access to means (such as the upper class) were pleased with their society and found their conformity satisfying.  On the other hand, groups that accepted the terms of the culture (the value system), but were more constrained in their capacity to achieve the goals in a legitimate way were prone to innovate and or deviate.

Besides these two, other groups could “play along” with the system but lost sight of the goals and the overall values, thus behaving a little bit like robots, and yet other groups gave up altogether on both ends and means, and withdrew from society in often pathological ways.

Merton labeled these four groups conformists, innovators, ritualists, and retreatists, respectively.  Merton only hinted at a fifth category (outside his tables) composed of those who proposed altogether different goals and different means.  He could have called these serious reformers or even revolutionists.

Merton’s double matrix of adaptation, based on the “fix” between ideology and social structure

How does this old but useful scheme fare when we consider present-day globalization?   I will offer the following proposition in this note and will develop its implications in future articles.

Merton’s modes of adaptation between ideology and social structure, or, if you prefer, between values and attitudes on the one hand, and what Max Weber called “market chances” on the other, took place within the framework of nation states.  For example, we could distinguish between the Nordic model, the Anglo-saxon model, and the Chinese model, each with a different way of articulating the social structure (e.g. some more egalitarian than others) and idea systems (e.g. individualism vs. collectivism). But these were discrete countries.

What globalization has done is break that very framework, displacing people and ideologies, with a general result of disarticulation and disorientation, which sociologists have always called anomie[8].  This is the novelty of globalization, generated and propelled by the joint dynamics of late capitalism and technology (ICT).

I offer the Merton scheme in order to clarify the study of globalization and the way it affects society, that is, the way it affects how people believe and behave. In this short note, I will only anticipate some working hypotheses, to be explored in detail in the near future.  These are:

In all these hypotheses, it is easy to perceive how human life, including social conflict has become anomic.  For the moment, the political expression of such anomie is the emergence of nationalism, reactionary populism, identity politics, and unproductive polarization in every single domain of discourse and public action.

I also propose to follow these remarks and tentative hypotheses in the future with a look at what the mysterious Box 5 may look like and its chances for emerging and developing.  This box contains, in the words of Rutger Bregman, a utopia for realists[10].  I end this note with a famous quote from Oscar Wilde, with which this author opens his own book:

A map of the world that does not include Utopia is

Not worth even glancing at, for it leaves out the

One country at which Humanity is always landing.

And when Humanity lands there, it looks out, and,

Seeing a better country, sets sail.  Progress is the

So, as they say, stay tuned.

[1] There is an increasing awareness of the deficiencies in economic thinking however, for example by the Nobel economist Edmund S. Phelps, “The Three Revolutions Economics Needs,” cited in Project Syndicate, January 23, 2019.  Some economists have tried to redefine growth and invent new measures of economic “success”, so far with only limited results.  One example is Diane Coyle, The Economics of Enough, Princeton University Press, 2011.

[4] A model of such dystopian future is already on display at political re-education camps in Kashgar (in Chinese, 喀什) prefecture of northwest China’s Xinjiang region.  It suggests that socialism and capitalism share a similar mind-set when it comes to disciplining the work force.

[5] This is the central message of a half-forgotten book by Herbert Marcuse, Eros and Civilization, Boston: Beacon Press, 1955.  Following Marcuse, in 1972 William Leiss published a study titled The Domination of Nature in which he explored a new approach based on the possibilities of a “liberation of nature.”  The current planetary dynamics make such studies very relevant today.

[10] Rutger Bregman, Utopia for Realists and How We Can Get There, London: Bloomsbury, 2017, originally published in the Netherlands in 2014 as Gratis geld voor iedereen: en nog vijf grote ideen die de wereld kunnen veranderen.